This codelab uses Chrome DevTools. Download Chrome if you don’t already have it.

This codelab explores how both minifying and compressing the JavaScript bundle for the following application improves page performance by reducing the app’s request size. 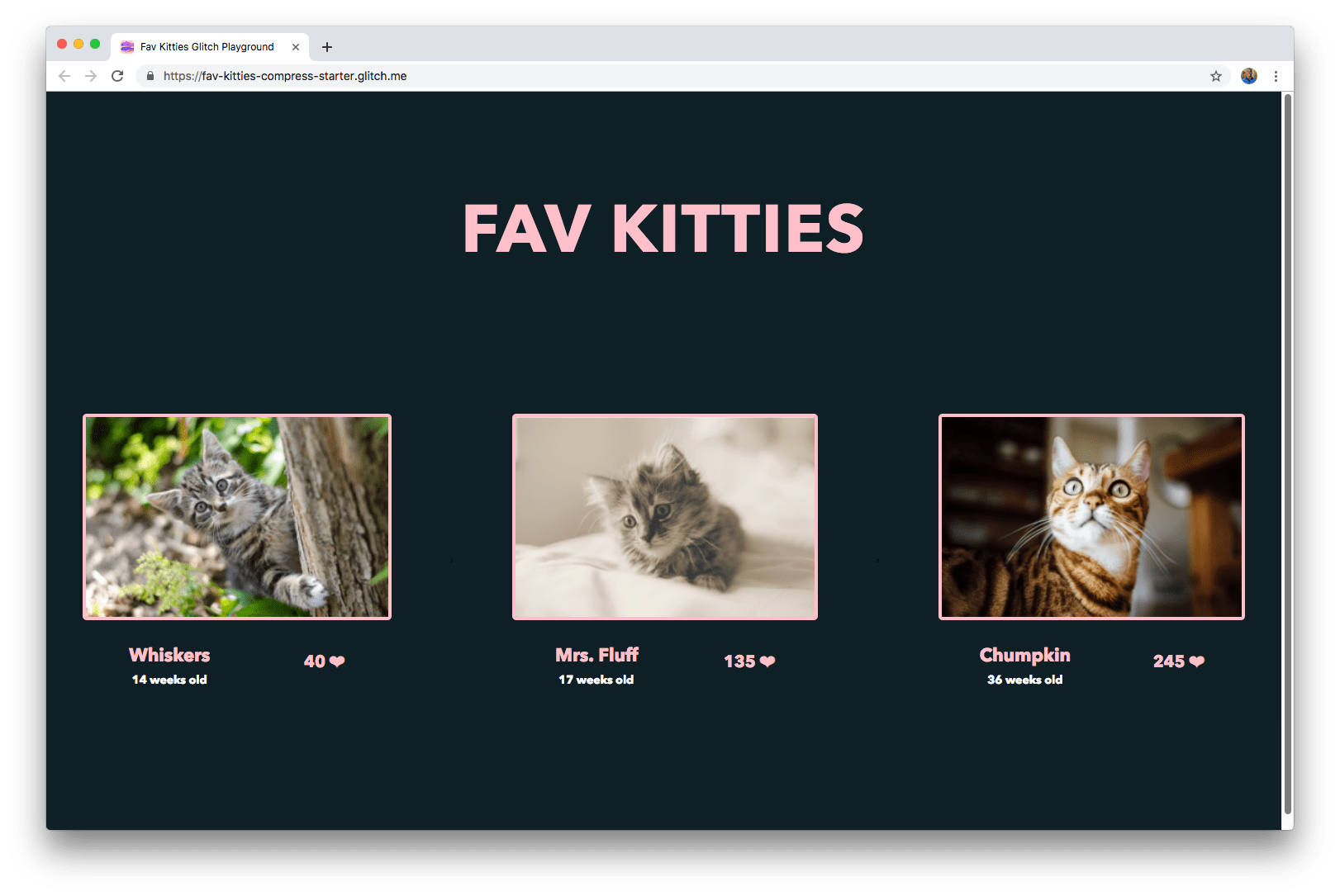 Since webpack is used in this application, any changes made to the code will trigger a new build which can take a few seconds. Once it completes, you should see your changes reflected in the application.

Before diving in to add optimizations, it’s always a good idea to first analyze the current state of the application.

This app, which was also covered in the “Remove unused code” codelab, lets you vote for your favorite kitten. ?

Now take a look at how large this application is:

Although a lot of progress was made in the “Remove unused code” codelab to trim this bundle size down, 225 KB is still quite large.

Consider the following block of code.

If this function is saved in a file of its own, the file size is around 112 B (bytes).

If all whitespace is removed, the resulting code looks like this:

The file size would now be around 83 B. If it gets further mangled by reducing the length of variable name and modifying some expressions, the final code may end up looking like this:

The file size now reaches 62 B.

With each step, the code is becoming harder to read. However, the browser’s JavaScript engine interprets each of these in the exact same way. The benefit of obfuscating code in this manner can help achieve smaller file sizes. 112 B really was not much to begin with, but there was still a 50% reduction in size!

In this application, webpack version 4 is used as a module bundler. The specific version can be seen in package.json.

Version 4 already minifies the bundle by default during production mode. It uses TerserWebpackPlugin a plugin for Terser. Terser is a popular tool used to compress JavaScript code.

To get an idea of what the minified code looks like, go ahead and click main.bundle.js while still in the DevTools Jaringan panel. Now click the Response tab.

The code in its final form, minified and mangled, is shown in the response body. To find out how large the bundle may have been if it was not minified, open webpack.config.js and update the mode configuration.

Make sure to revert the changes here before continuing.

Including a process to minify code in your application depends on the tools that you use:

Peringatan: Many hosting platforms, CDNs and reverse proxy servers either encode assets with compression by default or allow you to easily configure them. This means that you may rarely ever need to set up your server similar to how it is done in the compression section of this tutorial, but you can continue to read if you are interested in learning how compression works.

Although the term “compression” is sometimes loosely used to explain how code is reduced during the minification process, it isn’t actually compressed in the literal sense.

Compression usually refers to code that has been modified using a data compression algorithm. Unlike minification which ends up providing perfectly valid code, compressed code needs to be decompressed before being used.

With every HTTP request and response, browsers and web servers can add headers to include additional information about the asset being fetched or received. This can be seen in the Headers tab within the DevTools Network panel where three types are shown:

Take a look at the accept-encoding header in the Request Headers.

The sample application in this tutorial is identical to the app completed in the “Remove unused code” codelab except for the fact that Express is now used as a server framework. In the next few sections, both static and dynamic compression is explored.

Dynamic compression involves compressing assets on-the-fly as they get requested by the browser.

NS server.js file is responsible for setting up the Node server that hosts the application.

All this currently does is import express and use the express.static middleware to load all the static HTML, JS and CSS files in the public/ directory (and those files are created by webpack with every build).

To make sure all of the assets are compressed every time they’re requested, the compression middleware library can be used. Begin by adding it as a devDependency in package.json:

And import it into the server file, server.js:

And add it as a middleware before express.static is mounted:

Now reload the app and take a look at the bundle size in the Jaringan panel.

From 225 KB to 61.6 KB! In the Response Headers now, a content-encoding header shows that the server is sending down this file encoded with gzip. 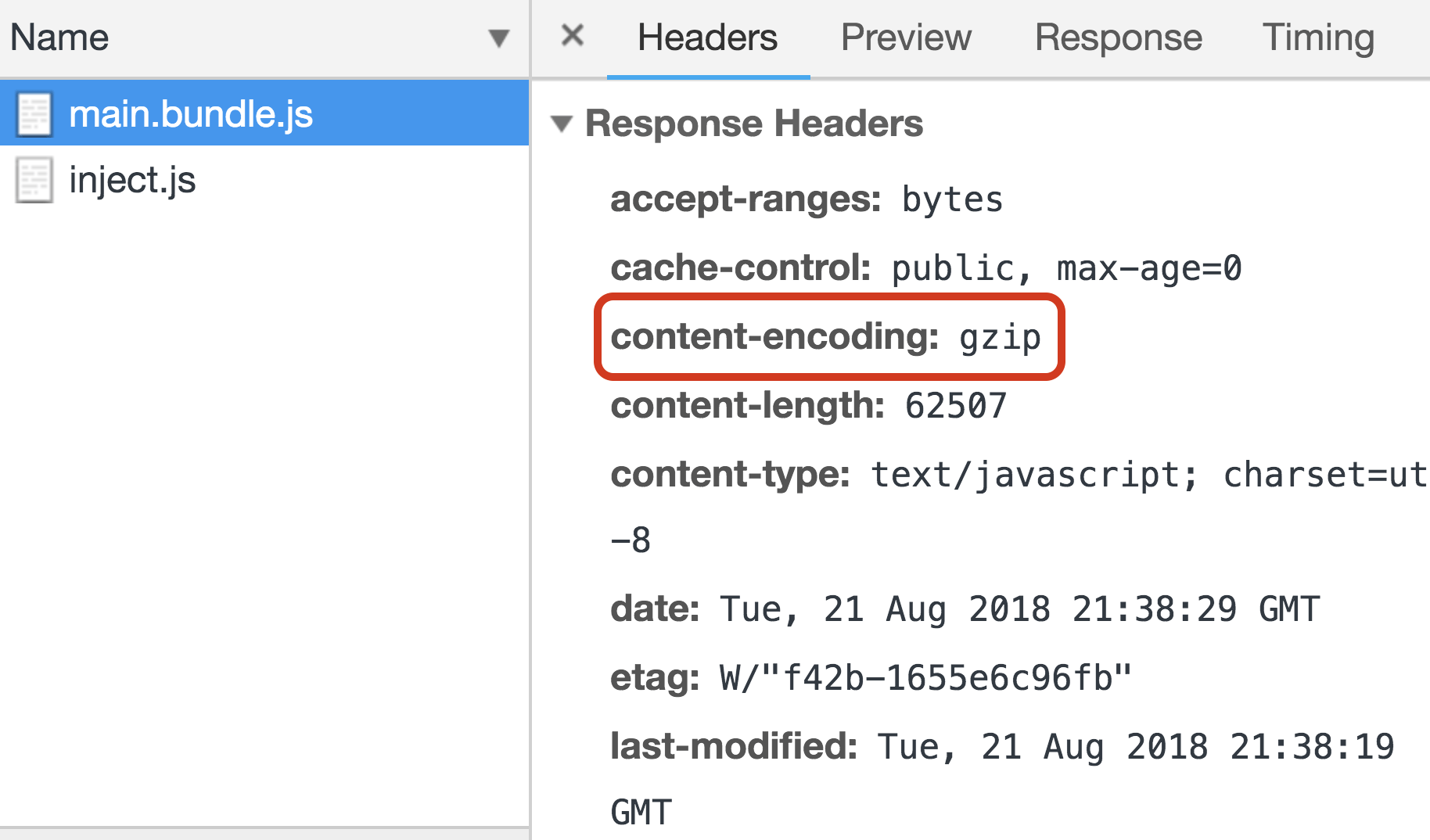 Ide di balik static compression is to have assets compressed and saved ahead of time.

Static compression with Node/Express and webpack #

Since static compression involves compressing files ahead of time, webpack settings can be modified to compress assets as part of the build step. CompressionPlugin can be used for this.

Begin by adding it as a devDependency in package.json:

Like any other webpack plugin, import it in the configurations file, webpack.config.js:

And include it within the plugins array:

By default, the plugin compresses the build files using gzip. Take a look at the documentation to learn how to add options to use a different algorithm or include/exclude certain files.

When the app reloads and rebuilds, a compressed version of the main bundle is now created. Open the Glitch Console to take a look at what’s inside the final public/ directory that’s served by the Node server.

NS public/ directory is included in the .gitignore file. Directories that contain build files are usually included here in order to be ignored by Git, and Glitch also hides these files from the editor tree.

The gzipped version of the bundle, main.bundle.js.gz, is now saved here as well. CompressionPlugin also compresses index.html by default.

The next thing that needs to be done is tell the server to send these gzipped files whenever their original JS versions are being requested. This can be done by defining a new route in server.js before the files are served with express.static.

app.get is used to tell the server how to respond to a GET request for a specific endpoint. A callback function is then used to define how to handle this request. The route works like this:

Once the app reloads, take a look at the Jaringan panel once more.

Just like before, a significant reduction in bundle size!

This codelab covered the process of minifying and compressing source code. Both these techniques are becoming a default in many of the tools available today, so it’s important to find out whether your toolchain already supports them or if you should begin applying both processes yourself.