Today, when using the term: “responsive design”, you are most likely thinking about using media queries to change layout when resizing a design from mobile size, to tablet size, through to desktop size.

But soon, this perception of responsive design may be considered as outdated as using tables for page layout.

Viewport-based media queries give you some powerful tools, but lack a lot of finesse. They lack the ability to respond to user needs, and the ability to inject responsive styles into components themselves.

When referring to components for the sake of this article, this means elements, including elements that are made up of other elements, like a card or sidebar. Those components make up our web pages.

You can use global viewport information to style your components, but they still don’t own their styles, and that doesn’t work when our design systems are component-based and not page-based.

The good news is, the ecosystem is changing, and it’s changing pretty rapidly. CSS is evolving, and a new era of responsive design is right on the horizon.

We see this happen about every 10 years. 10 years ago, around 2010-2012, we saw a huge change with mobile and responsive design, and the emergence of CSS3.

So it works out that, yet again, the ecosystem is ready for some pretty big changes to happen to CSS. The engineers at Chrome and across the web platform are prototyping, speccing, and starting the implementation for the next era of responsive design.

These updates include user-preference based media features, container queries, and media queries for new screen types, such as foldable screens.

Responsive to the user #

These user preference media features include:

Preference features pick up on the preferences a user has set in their operating system, and help to build a more robust and personalized web experience, especially for those with accessibility needs. 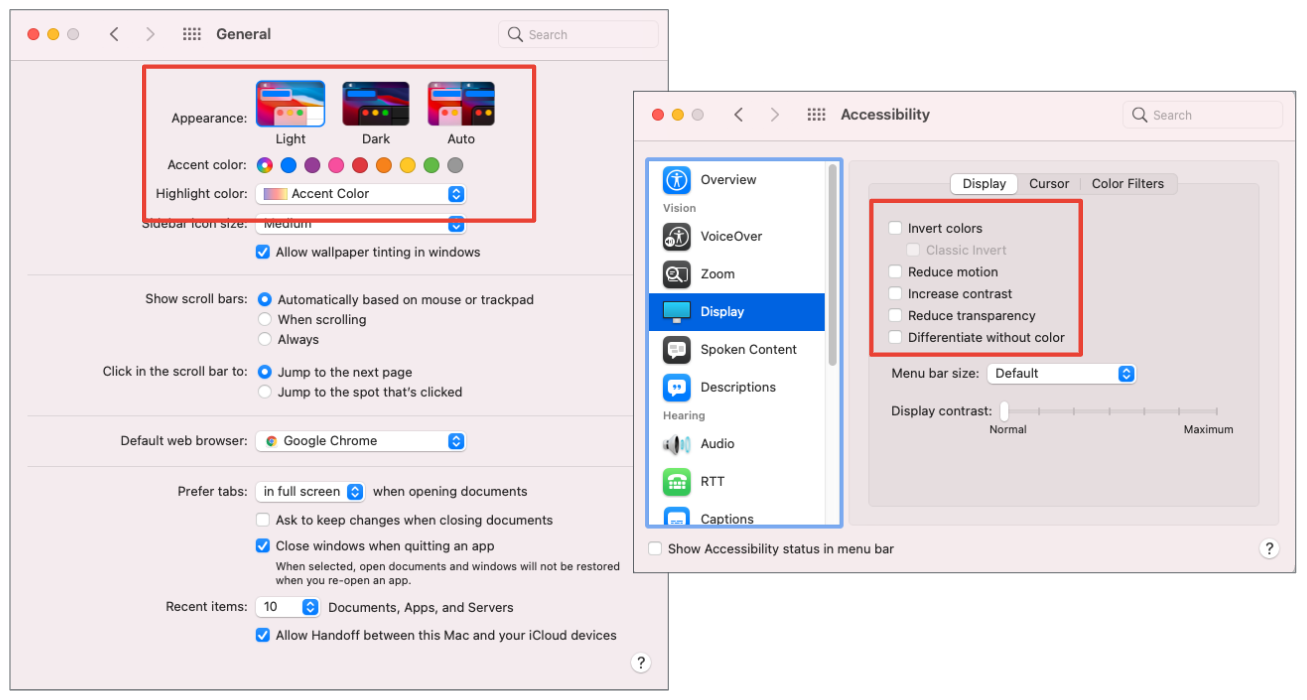 Users who have set operating system preferences for reduced motion, are requesting fewer animations when using their computer in general. Therefore, it’s likely that they wouldn’t appreciate a flashy intro screen, card flip animation, intricate loader, or other flashy animations while using the web.

Dengan prefers-reduced-motion you can design your pages with reduced-motion in mind, and create a motion-enhanced experience for those who don’t have this preference set.

Prefers-reduced-motion shouldn’t mean “no motion”, since motion is so critical to conveying information online. Instead, provide a solid baseline experience that guides your users without unnecessary movement, and progressively enhance that experience for your users without those accessibility needs or preferences.

Another preference media feature is prefers-color-scheme. This feature helps you to customize your UI to the theme which your user prefers. In their operating system, whether it’s on desktop or mobile, users can set a preference for light, dark, or auto themes, which change depending on the time of day.

If you set up your page using CSS custom properties, swapping color values is made straightforward. You can quickly update your color theme values, such as backgroundColor dan textOnPrimary to dynamically adjust to the new theme within the media query.

To make it easier to test some of these preference queries out, you can use DevTools for emulation instead of opening up your system preferences each time.

When designing for a dark theme, it’s not just about inverting background and text colors or dark scrollbars. There are a few considerations you might not realize. For example, you might need to desaturate colors on a dark background to reduce visual vibration. 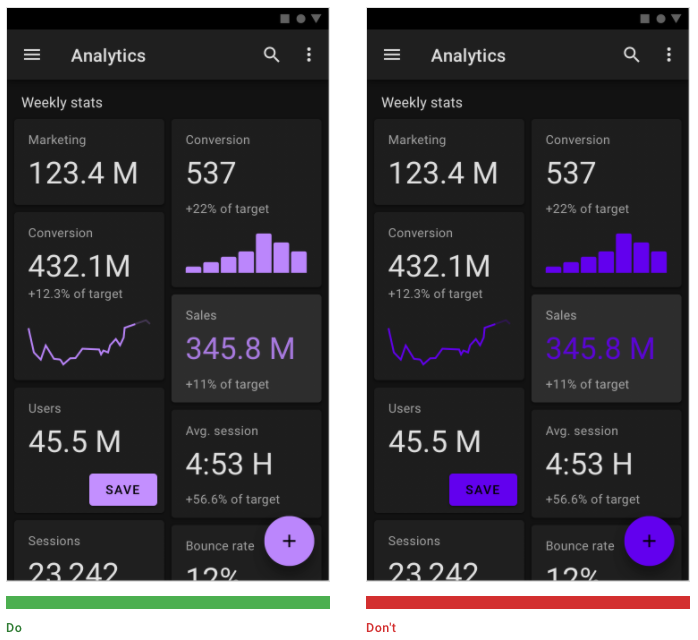 Instead of using shadows to create depth and draw an element forward, you may want to use light in the element’s background-color to draw it forward. This is because shadows won’t be as effective on a dark background.

Dark themes not only provide a more customized user experience, but they can also improve battery life significantly in AMOLED screens. Those are the screens we’re seeing in newer high-end phones, and they’re becoming increasingly popular across mobile devices. SEBUAH 2018 Android study on dark themes showed a power draw savings of up to 60%, depending on the screen brightness and overall user interface. The 60% statistic came from comparing the Youtube play screen with a paused video at 100% screen brightness using dark theme for the app UI vs a light theme.

Responsive to the container #

Here’s an example of the powerful abilities that container queries provide. You can manipulate any of the card element’s styles, including the link list, font sizes, and overall layout based on its parent container:

This example shows two identical components with two different container sizes, both taking up space in a layout created using CSS Grid. Each component fits its unique space allotment, and styles itself accordingly.

This amount of flexibility is something that is not possible with media queries alone.

Container queries provide a much more dynamic approach to responsive design. This means that if you put this card component in a sidebar or hero section or within a grid inside of the main body of a page, the component itself owns its responsive information and sizes according to the container, not the viewport

This requires the @container at-rule This works in a similar way to a media query with @media, but instead, @container queries the parent container for information rather than the viewport and user agent.

First, set containment on the parent element. And then, write a @container query, to style any of the elements within the container based on its size, using min-width atau max-width.

The code above uses max-width, and sets the links to display:none, as well as decreasing the time font size when the container is less than 850px wide.

In this demo plant website, each of the product cards, including the one in the hero, the sidebar of recently viewed items, and the product grid, are all the exact same component, with the same markup.

There are no media queries used to create this entire layout, just container queries. This allows for each product card to shift to the proper layout to fill its space. The grid for example, uses a minmax column layout to let the elements flow into their space, and re-layout the grid when that space is too compressed (which means that it hit the minimum size).

When there is at least 350px of space in the grid, the card layout goes horizontal by being set to display: flex, which has a default flex-direction of “row”.

With less space, the product cards stack. Each product card styles itself, something that would be impossible with global styles alone.

Container queries have so many use cases—one being a calendar component. You can use container queries to re-layout the calendar events and other segments based on the available width of their parent.

This demo container queries to change the layout and style of the calendar’s date and day of the week, as well as adjusting the margins and font size on the scheduled events to help them better fit the space.

So now we can think of Macro and Micro layouts within the same UI component to allow for some really nice nuanced design decisions.

These demos are now available to play with behind a flag in Chrome Canary. Go to about://flags in Canary and turn on the #enable-container-queries flag. This will enable support for @container, inline-size dan block-size values for the contain property, and the LayoutNG Grid implementation.

To build on container queries, the CSS working group is also actively discussing scoped styles to help with proper namespacing and collision-avoidance for components.

Scoped styles allow for pass-through and component-specific styling to avoid naming collisions, something that many frameworks and plugins like CSS modules already enable us to do within frameworks. This spec would now allow us to write encapsulated styles natively for our components with readable CSS without the need to adjust the markup.

Scoping would allow us to create “donut shaped” selectors, where we can specify where to keep a style encapsulated, and where to break out of that scoped style to refer back to a more global style.

Responsive to the form factor #

The next topic in our conversation about the new era of responsive design is a shift in form factors, and the growing possibilities of what we’ll need to be designing for as a web community (such as shape-shifting screen or virtual reality).

Foldable or flexible screens, and designing for screen spanning is one example of where we can see a form factor shift today. And screen-spanning is yet another spec being worked on to cover these new form factors and needs.

An experimental media query for screen-spanning could help us here. It currently behaves like this: @media (spanning: . The demo sets up a grid layout with two columns: one has a width of –sidebar-width, which is 5rem by default, and the other is 1fr. When the layout is viewed on a dual screen that has a single vertical fold, the value of --sidebar-width is updated with the environment value of the left fold.

This enables a layout where the sidebar, the navigation in this case, fills the space of one of the folds, where the app UI fills the other. This prevents a “crease” in the UI.

You can test out foldable screens in the Chrome DevTools emulator to help debug and prototype screen spanning directly in the browser.

Exploring UI design beyond a flat screen is yet another reason why container queries and scoped styles are so important. They give you the opportunity to silo component styles from page layout and global styles, and user styles, enabling more resilient responsive design. This means you can now design macro layouts using page-based media queries, including screen-spanning nuances. At the same time using micro layouts with container queries on the components,and add user-preference based media queries to customize user experiences based on their unique preferences and need. 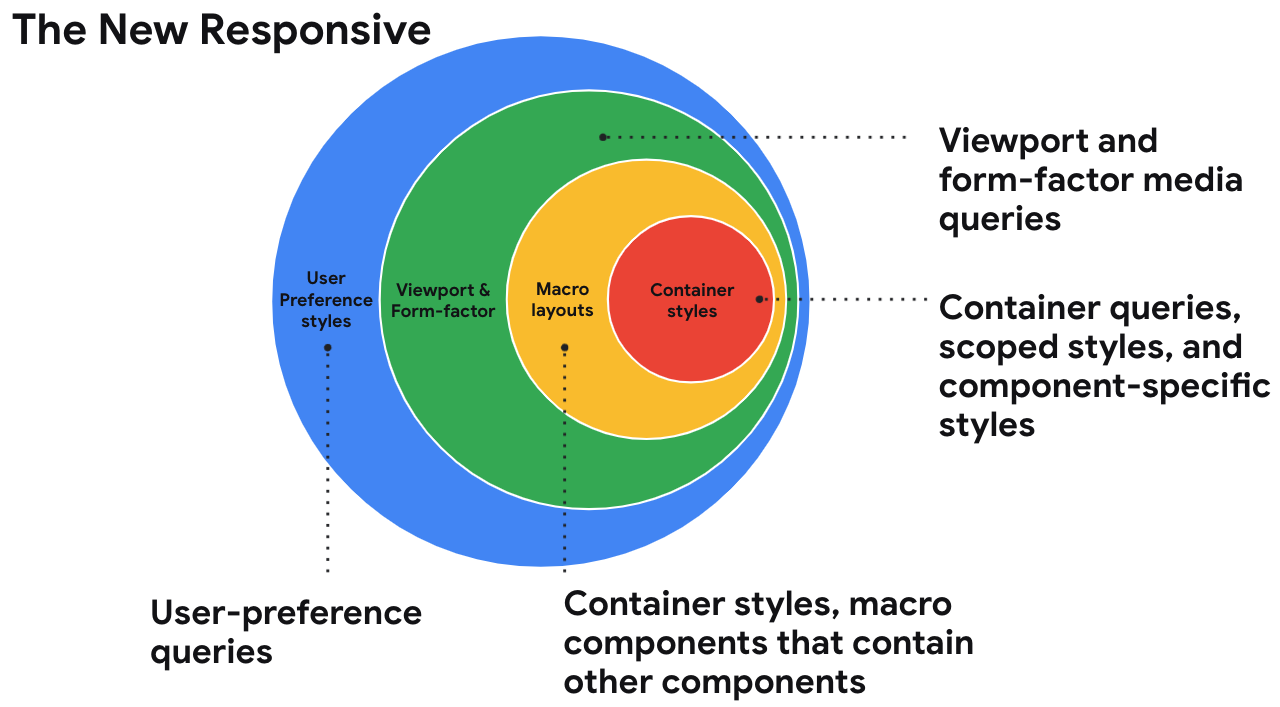 This is the new responsive.

It’s combining macro layout with micro layout, and on top of all of that, it’s taking user customization and form factor into account.

The next era of responsive design is here, and you can already start to explore it yourself.

And for now, if you want to level up your CSS game, and maybe revisit some basics, my team is launching a brand new, totally free CSS course and reference on web.dev. You can access it via web.dev/learnCSS.

I hope you enjoyed this overview on the next era of responsive design, and some of the primitives that will come along with it, and I also hope you’re as excited as I am about what this means for the future of web design.

It opens up a huge opportunity to us as a UI community to embrace component-based styles, new form factors, and create user-responsive experiences.